Which would you prefer when learning how to operate a new software? Read a 3000-word description or watch a 6-minute video?

If you’re a new recruit and I’m responsible for teaching you how to use an internal tool I’d rather you sit beside me and watch my computer screen as I use the app, because it makes life easier for both of us.

But in a situation where you’re not the only new recruit, say, there are 200 others. And assuming we recruit every 3 month.

It would make more sense to record whatever is happening on my screen, including the movement of my cursor and also record my voice through the external microphone since I’d be explaining things.

And when I’m done I’ll edit the video, save it and share it with all the new recruits.

It turns out that with screen recording apps you can record everything you do on screen, (or on a section of your screen) you can save it as a video on your computer memory, on the cloud, or even livestream it.

Here are 7 of the best screen recording apps around:

Loom has a clean control interface which makes it easy and pleasant to use.

One really neat feature about Loom is, it allows you to pause or resume recording whenever you so desire, this isn’t something that you’ll see in a lot of other screen apps.

When you finish recording your video, you can export it to Loom’s cloud storage where all users have unlimited video storage.

If you’re the type that creates a lot of customer support related videos you won’t have to worry about memory space, loom has you covered.

Loom also allows you to trim away unnecessary video segments from the beginning, middle or end of the recording. When you’re done recording and editing there’s an incorporated slack feature that allows you to share your videos links to specific groups right from your Loom dashboard.

And if you don’t want to share it just yet, that’s fine, you can download them as MP4s

Krisp is a noise cancelling app that removes background noise during calls in real time. You can use it with any conferencing application like Skype, Zoom, Slack or more. Krisp will help remove both incoming and outgoing noise from both sides of the call, allowing you to speak and listen without noise at anytime.

Krisp can work perfectly with Loom screen recording app removing all the external background noise. You can check out the video and give it a try yourself:

Camtasia has all the tools you’ll need to make high-quality professional tutorials.

With Camtasia, you can record virtually anything on your computer screen whether it be websites, software, video calls, or PowerPoint presentations just to name a few.

It has a built-in editor so you won’t need to export your videos to another software for editing.

And while you record your screen, you can as well record yourself giving some explanations because it also allows webcam and microphone inputs.

And for new users who are afraid of the learning curve, Camtasia provides clear and easy-to-understand tutorial videos that explains all you need to start with the app and its editing tools.

Camtasia Pricing: $249 for a lifetime business license for up to two devices and a priority customer service support

For Screencastify you don’t need to download any software, only a lightweight google chrome extension, that you can domicile on your browser.

If you’re looking for something with an easy learning curve and a clean interface then you’re in luck because you can set everything up in one to two minutes.

It does the basics– it records your screen and allows you to record yourself via the webcam while at it.

But the downside is:

It doesn’t come with a lot of editing functionalities

In addition to recording your PC screen, Apowersoft Unlimited can also capture videos of your mobile screen, that’s of course if you buy the unlimited package.

The package comes with a subscription to all the 17 Apowersoft apps and they can all be launched from a single dashboard. Among these apps, there’s one dedicated to recording Android screen and another for iPhone screens.

It allows you to choose the part of your screen to be recorded (it could be the full screen, a custom area, or a space the same dimensions as a mobile device).

Its built-in editor isn’t the best, but you’ll definitely be able to tweak things like brightness, contrast, and saturation. You also get to trim segments of the video that seem unnecessary

ScreenFlow polishes your screen recording to a brilliant shine, but fair warning: it’s not the easiest app to learn. So getting used to its features might take some time. But once you get over the learning curve, things become a lot easier.

It also boasts of a media library of over 300,000 videos, audios and images that you can adapt for use in your screen recording and editing.

It also prides itself with being able to record desktop at retina resolution(i.e a high level of attention to details).

Pricing: $129 for a lifetime license.

However, one thing that sets it apart from the competition is that it supports scheduled captures.

With this tool, you can record video calls, webinars or live streams even if you’re away from your computer and by clicking the clock icon you can set the duration you want the app to record for, this tells the program to automatically stop recording after a specified amount of time.

Pricing: $59.95 for a one-computer lifetime license.

What separates FlashBack Pro from the pack, are the fantastic sound editing functionalities it carry, there’s nothing particularly spectacular about its screen recording or its video editing.

But, when you decide to record your voice during a desktop capture, a lot of things can go wrong with the audio. Unexpected noises can come from the most unexpected of places.

Someone in a room adjacent to yours might mistakenly close the door with a loud bang; your keystrokes, due to their closeness your mic might sound like hammers hitting a nail. Most screen recording apps help you reduce these noises but none does so as masterfully and easily as Flashback Pro

To turn down the volume of your system audio track for instance, all you need do is highlight the particular segment on the timeline at the bottom, right click and change the volume.

You can also remove background noise, you can add sound, you can delete some sounds and you can even insert silence; you can also apply tweaks to make sure the volumes of microphone and PC match

Pricing: $49 for a lifetime home license 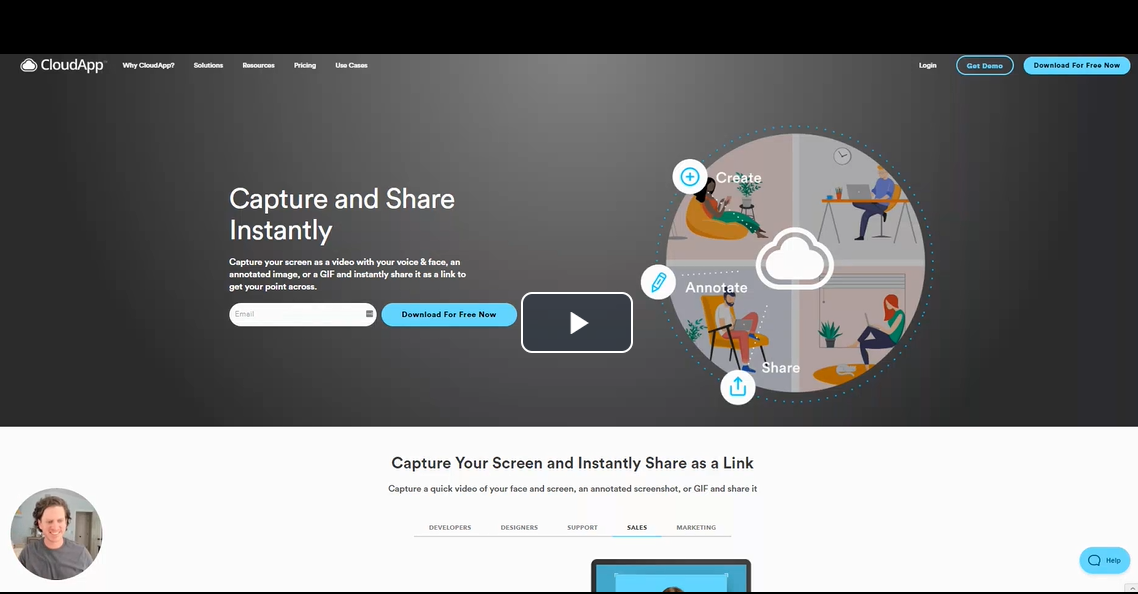 Pricing: CloudApp has different pricing tiers, but is free to start. It also offers a free Pro version of its product to educators and students.

Ever used any of these apps before? Now it’s your turn, please share your experiences (whether good or bad).

Also are there any really fantastic apps you think I left out? If yes, please hit the comments section.

How to remove background noise in Audacity?

How to remove background noise in OBS Studio? Alternative way