We’ve all been on a conference call where someone’s voice echoed during the meeting. Sometimes, it’s simply distracting and annoying, but other times the echo can be so bad that it’s impossible to understand the speaker.

How many times have you had to interrupt a call to say, “Sorry, there’s a bit of an echo on your end!”

Speaker phones, conferencing devices, and laptops are offering better quality sound than ever, but they can still run into problems with echo on audio and video calls.

That’s why Acoustic Echo Cancellation is so important. It’s a way of solving the issue and ensuring every call you have is clear and echo-free. Let’s take a look at this feature and why it’s a necessary part of any conference technology.

What is Acoustic Echo?

First of all, let’s talk about what Acoustic Echo is and why it happens. This issue mostly occurs due to how sound is captured by the technology you are using to have the call. 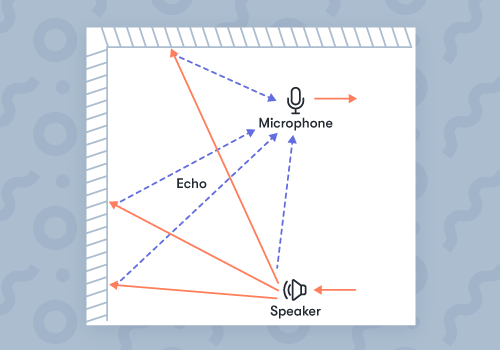 This problem often occurs when the caller is on speakerphone, and it’s possible to resolve the issue by using headphones. However, that’s not always the case. Acoustic Echo also can be an issue not only on speakerphones but also on mobiles and other handsets, due to the mechanical coupling of the earpiece speakers and microphones.

This is the “echo” we are concerned with, and the length of the delay determines how annoying it will be. So, how long does an echo need to last until it becomes significantly disruptive to the phone call?

When most people hear the word, “echo,” they immediately think of shouting into an empty room to hear their voice repeating back to them over and over again. And while this kind of echo, called room echo, is more familiar to us, it’s actually different than what you experience on a call or online meeting, which is acoustic echo.

How Much Echo is Too Much?

You might think that you’d be able to ignore a small echo, but it really does have quite an impact on your ability to listen to a call. Even a little bit of echo can be too much for most people to handle.

How significant of a delay does there have to be for it to annoy the listener?

An echo with a delay of less than 40ms will most likely not annoy the listener. In fact, this type of delay is usually barely noticed. However, an echo of more than 40ms is enough to be perceived by the human ear.

An echo of this length can make speech very difficult to understand. Over a full phone call, it can become incredibly annoying for all participants. Plus, it can result in callers not understanding each other and important information being missed.

How Does Acoustic Echo Cancellation Work?

What do we need to do to cancel out the Acoustic Echo? Let’s take a closer look at how we combat this echo with Acoustic Echo Cancellation.

In order to stop this from happening, you’ll need a mechanism that blocks the transmission of far-end speech back to the other party in the call. It should block any echoes, reverberations, and unwanted added sounds from the signal passing through the acoustic space.

Acoustic Echo Cancellation works by creating a filter that can do exactly that. It’s based on an adaptive algorithm, which adapts this filter to model the acoustic path. The output of the filter is then removed from the acoustic path signal in order to create a “clean” signal output. Any echoes in the call environment are removed.

For example, let’s say you’re having a call with someone, and you are on speakerphone. The filter will block out any echoes and reverberations in your space, so the person you are calling will only hear your voice.

The filter can also detect any unrelated sounds in the acoustic path. For example, if music is playing in the near-end space, it can be picked up by the far-end signal. The adaptive filter will cancel the sound of the music. This allows for a clear conversation–even if there is music in the background.

For instance, if you’re on a hands-free call in your car while music is playing, you won’t have to pause the music during the conversation. Both the music AND the voice of the other speaker will be eliminated from the signal that is being picked up by the microphone. At that point, only the local speaker’s voice is sent out on the far end.

If you’re trying to have an important phone call, whether it’s for work or to catch up with a loved one, you don’t want to be distracted by annoying echoes. That’s why it’s so important to avoid this echo with some sort of Acoustic Echo Cancellation.

All video and audio conference technology needs to address this issue, or it is going to cause issues regularly on phone calls.

In addition to making your calls clearer and easier to understand, having acoustic echo cancellation will save you a lot of money. You will be able to have excellent sound quality in any conference room, without having to invest in sound-absorbing construction and materials.

The good news is that Krisp supports Acoustic Echo Cancellation! It works by not letting the echo captured by your actual microphone reach the other participants on your call. That means that you’ll be able to communicate online with total ease.

Krisp removes room echo in real time during your call by having Room Echo Cancellation built right into our bi-directional Noise Cancellation. That means you can take a call in any room, even an echoey one, and you’ll still sound great. You’ll be able to take a call with multiple participants, all in different environments, with each one coming through loud and clear.

Still have questions about how Krisp’s Acoustic Echo Cancellation works? Feel free to contact us at any time in the comments section below or by contacting us at [email protected]i!