Modern phones have brought the world a lot closer together. But, they can also make things more complicated, especially if you’re trying to manage your personal life, business life, and a gig on the side all through the same phone.

Constant buzzing and notifications can be hard to manage, and even harder when you don’t know why people are calling.

Fortunately, there are a few options for ways to make your phone even more effective, and easier to manage at the same time. One of the best for working professionals is to get a second phone number app to help organize your calls and recognize which ones are most important.

If you’re wondering how to get a second phone number, you’re in the right place.

What is a Second Phone Number App?

Second phone number apps give you a second number on the same phone you’re already using. Many rely on an internet or cellular connection to make the calls work, instead of regular phone signal.

Second phone number apps also often give you access to other features and functions at the same time. Many will also let you use a variety of different area codes, and some can even create a phone number from a different country entirely.

It’s also easy to set up a recording function to run through your second phone number so that you never lose the details of an important conversation.

Second number apps are easily the simplest and most cost-effective way to get a second phone number since you don’t need a second sim card, separate phone subscription, or any other additions to your existing phone.

Now that you know what a second phone number app is, let’s talk about how they can be useful.

Why Do You Need a Second Phone Number App?

There are plenty of reasons to get a second phone number app, but one of the most common is organization.

With a second phone number app, you can separate your business and personal life into the two numbers without having to pay for a second phone and phone plan.

Of course, the reverse is also true. When you need to focus on work you can screen your personal line, while still accepting business calls on your second phone number.

It can also be helpful if you have to handle international calls or are expanding your business and need a local phone number for both locations.

That additional privacy makes it a lot easier to give out a phone number, especially since you know that you can drop the phone number any time you need to.

Okay, let’s talk about how to pick the best second phone number app, and look at which apps are the best options on the market right now.

What is the Best App for a Second Phone Number?

How to Pick the Best Second Phone Number App for You

That might mean that the best second phone app for you is one that has very few bells and whistles, a low subscription price, and consistent performance. Or, you might need a second phone number app with a few more features, a reasonable subscription, and great customer service contacts.

You also need to make sure you’re matching your second phone number app to the kind of phone you own. Some will only work on iOS (and will need you to keep your phone reasonably up to date), while others are Android-specific.

Don’t worry though, there are plenty of options in both markets. We’ve selected some of the best from each marketplace, as well as some of the best options that are available in both the Google Play Store and the Apple App Store. 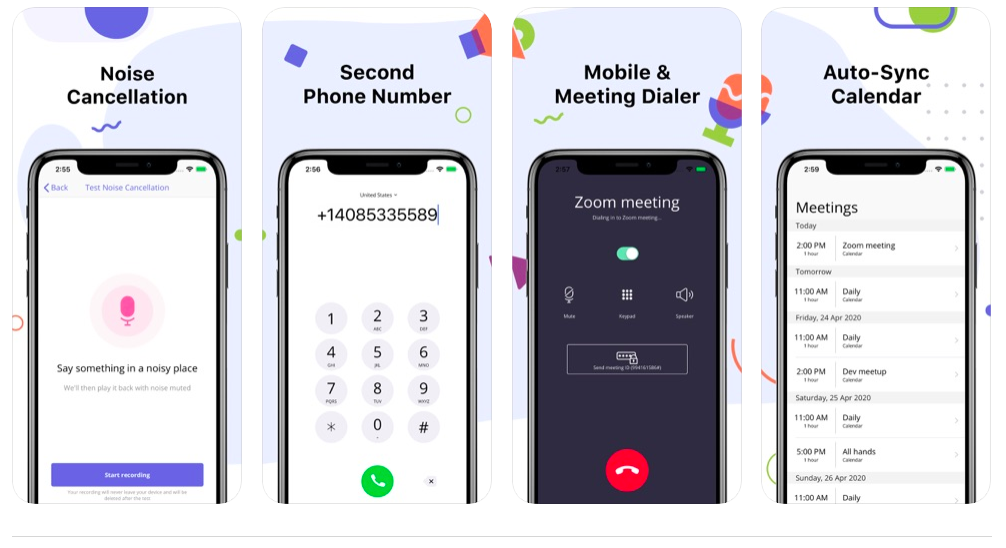 Krisp is one of the best second phone number app for iPhone available on the App Store. Besides providing you with a second phone number, Krisp mobile dialer is equipped with revolutionary noise cancelling technology to make your phone calls clearer. That’s a huge advantage if you’re a business person on the go.

With Krisp, you get the second phone number to keep your privacy as well as make and receive US and Canada phone calls from anywhere in the world. For better privacy, you can authenticate your number and use your own caller ID for calls.

The free version gives you 120 minutes of call time within the United States and Canada per week, while the paid version comes with unlimited call time.

There are several subscription levels, and each added subscription adds more features and benefits to the program, so head over to the pricing section to learn more. 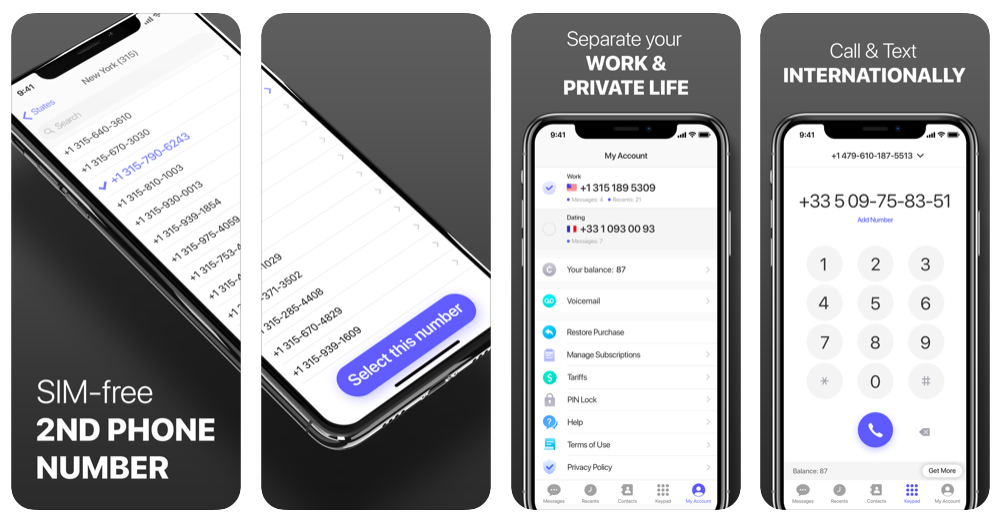 Second Phone Number + is a full-service phone app that gives you a wide range of different numbers to choose from. In the United States, they have available phone numbers in almost any area code, so you simply type in your preferred area code and choose the number you like best.

They offer full-service texting and messaging service, including the ability to send pictures via your second phone number.

They don’t offer a free second phone number, you do have to pay if you want the second phone line. However, they have a range of subscriptions or pay as you go options that make it easy to choose the most cost-effective options for you. 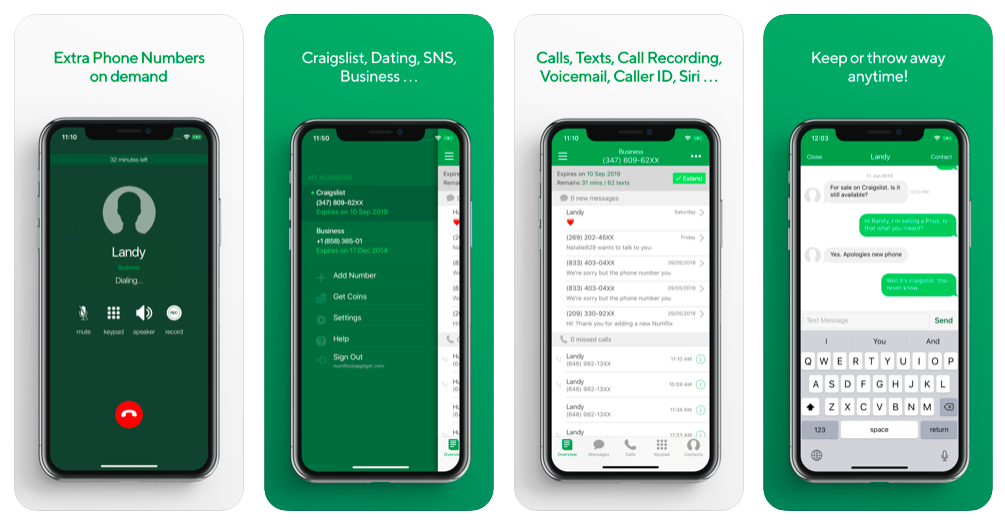 Numflix is another full-service phone line that’s designed to help you manage your life with a second phone number or a third or fourth for that matter. This app lets you separate your personal life from business, dating, and even get another number to manage sales listings in Craigslist or other websites. Those are just a few examples of course.

This app is designed to provide multiple temporary phone lines, with very little need to stick to any one line or phone number. You can get rid of any line as soon as you need to.

However, while they offer full voice call, texting, and messaging abilities, Numflix does charge for ‘coins’ to handle those interactions. So, you’ll pay a small fee for each line, and then additional fees to use those phone numbers. 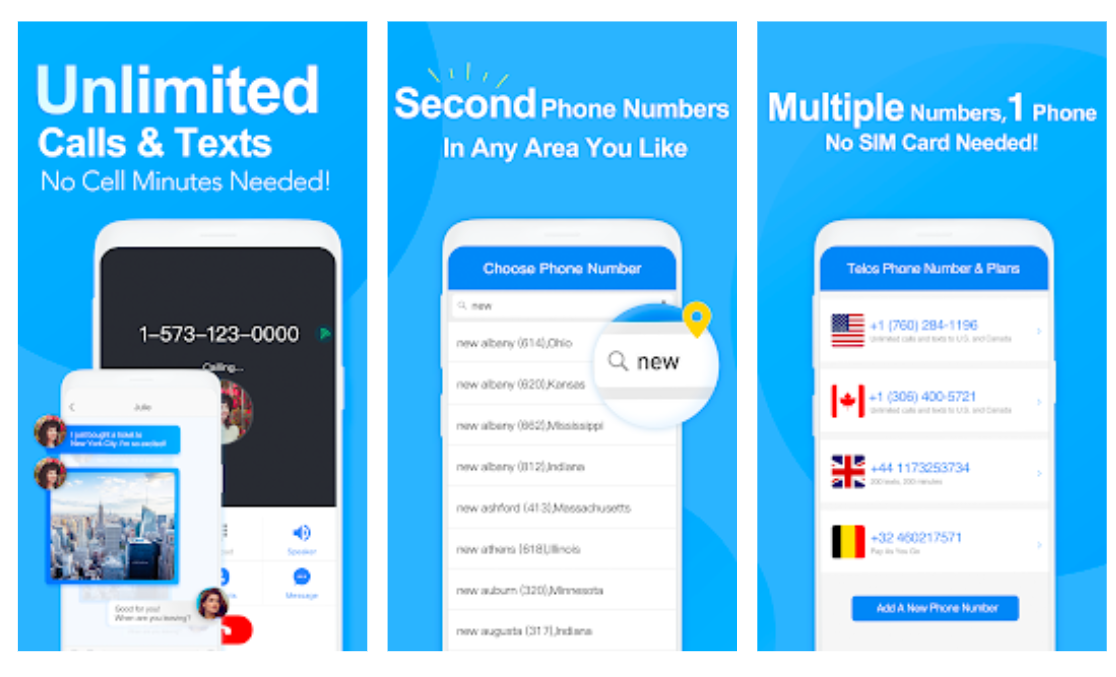 Moving to the apps that are compatible with Android, this option is an international calling program that works in the United States, Canada, China, Belgium, and the United Kingdom. This app works a little different than the other apps we’ve discussed since it has a per-minute charge.

The amount of the charge depends on the location of the call. In the United States, calls cost.09 credits per minute. Calls to Japan cost slightly more than two and a half credits per minute. 500 credits cost 9.99 USD, and you get slight volume discounts for larger credit purchases.

Telos also offers free call and texting offers, from bonus credits to watching ads and other relatively low-effort tasks. If you’re primarily using Telos for personal reasons you can probably get a lot of call time for free. Business users are probably better off using a paid version of the app.

Telos to Telos is Free, All Other Calls Have a Variable Per Minute Charge 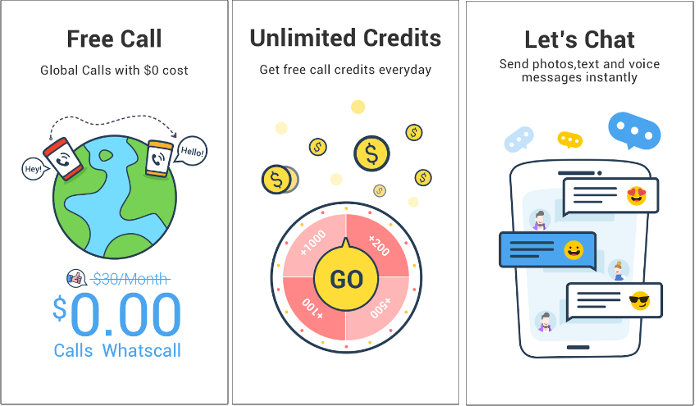 WhatsCall is another phone app that’s completely free to use, as long as you’re only calling from one WhatsCall device and account to another. Once you’re calling to a normal phone you will need WhatsCall credits.

Like Telos, WhatsCall makes it relatively simple to earn free credits by completing simple in-app tasks and even playing online games of roulette. However, you need a lot more credits to place calls with WhatsCall, so despite the high credit earnings, it’s still likely that you’ll need to pay for additional credits if you need to make long calls or regular calls.

This system is one of the simpler options you can get, though we’d recommend it more as a supplemental personal line than the phone number you run your business through.

Free to Use, Calling Requires Credits 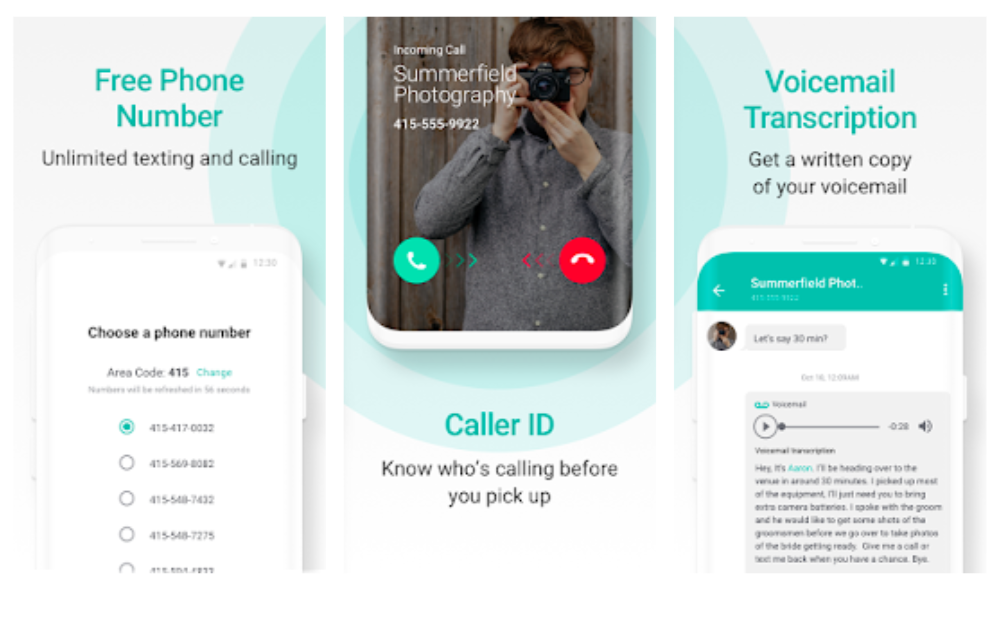 2ndLine is also fully compatible with talk and text, and even supports the use of emojis, video clips, and images.

You have the option of using a passcode to keep all messages and calls routed through your new second phone number to keep everything safe and secure. You can also use Google Smartlock to avoid having to put in your passcode when you don’t need to.

Free Calling and Texting to the United States and Canada, Subscriptions Start at $9.99 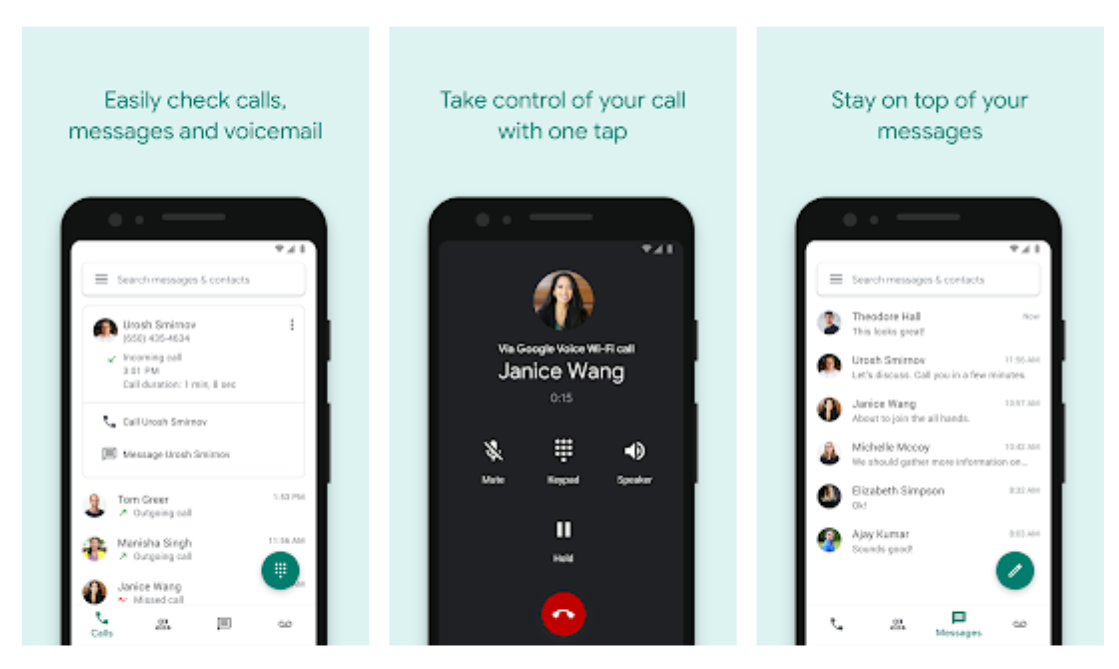 Of course, no second number apps list would be complete without at least mentioning Google Voice. Despite the name, this flexible app works on both iOS and Android systems. There are two different versions of this app, one for personal use, and one for business use.

That helps you to customize the features, and the cost, of the program to what you use it for. At 10 dollars a month, the starting subscription of the business level is more affordable than almost any traditional phone plan.

However, while calling in Canada and the US is free, international calling isn’t supported until the $30 a month subscription level.

Mostly Free for Personal Use, starting at $10 a month per user for Business Use 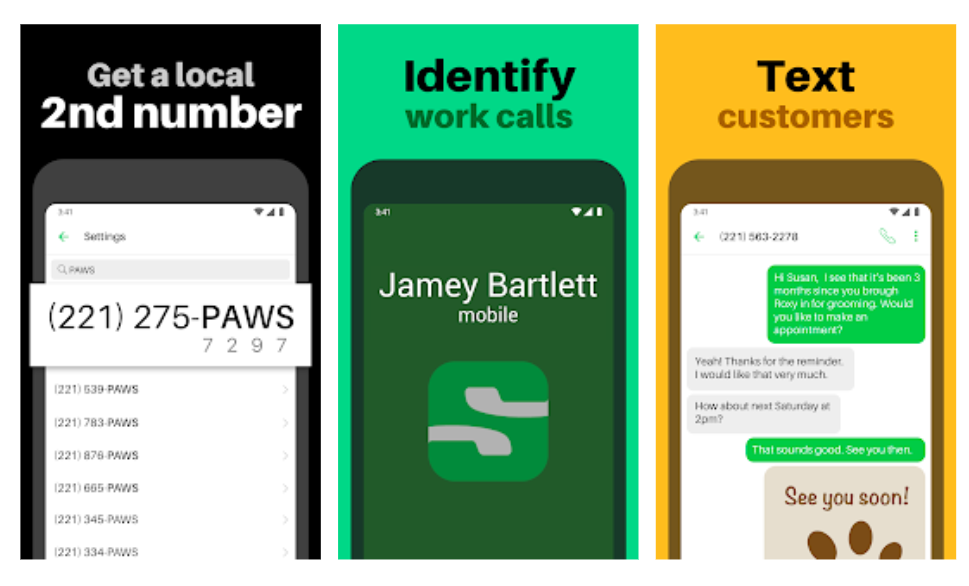 Sideline boasts that their service works just like your traditional phone number, but costs 80% less than the average phone plan. You get the flexibility of choosing whether you want to be billed monthly, bi-annually, or annually. They also offer unlimited texting and calling on all subscription levels, and as well as their full suite of features.

The free trial is also a great way to decide if this is the right program for you. Since it’s compatible with both iOS and Android, it works for almost all smartphones.

It includes the basics like Voicemail on all subscription levels, and you also get to choose your area code and pick from the available phone numbers to find one that’s easy to remember. 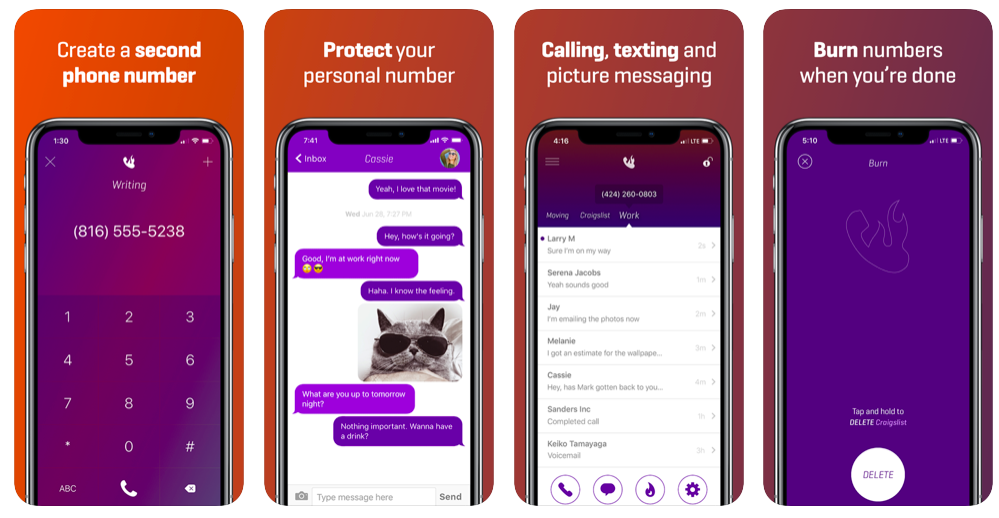 Burner is named after the colloquial burner phone and is designed with people who want to have and drop phone lines relatively quickly. That doesn’t mean that’s how you must use it though. They offer a permanent second number service as well.

Burner automatically routes phone calls from your second phone number to call to your main number. That makes it a little less effective as a business number, but you’ll be able to use it for dating, gig work, craigslist ads, and generally anyone you don’t want to have your permanent phone number.

The app is also designed so that you do not commit any particular number and can drop it any time you want.

Free for 7 Days, Prepaid Price Per Minute Billing, or Subscriptions Starting At: $4.99 per month 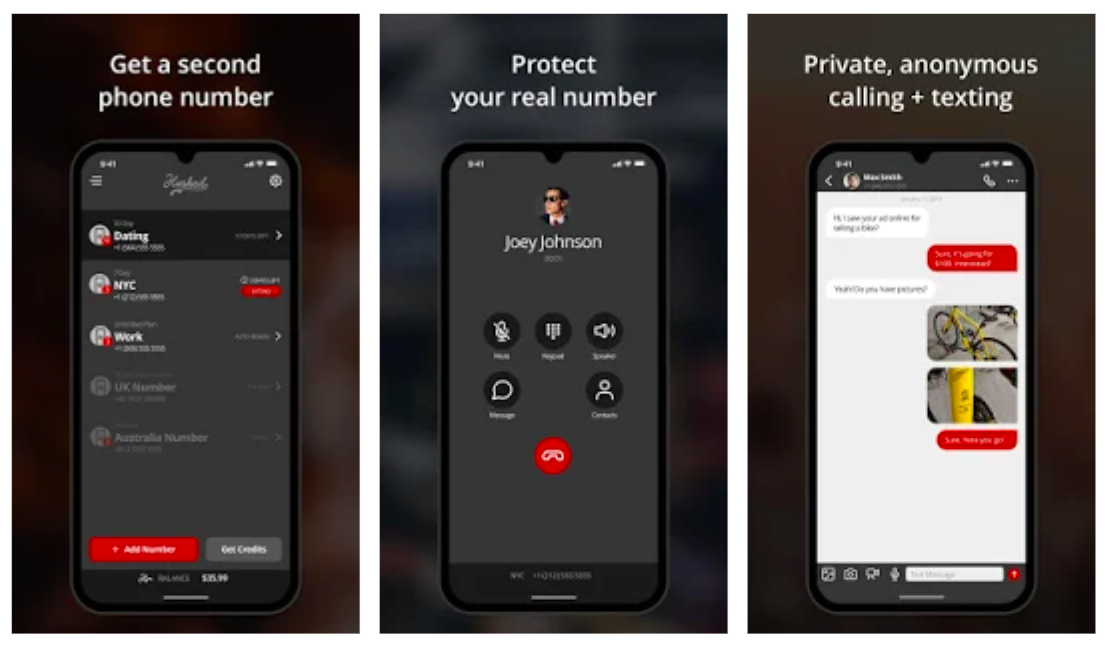 The last app on our list, Hushed is a VOIP service that lets you use the service as either a pre-paid plan or a regular subscription. If you choose the prepaid plan you can increase the days in your plan at any time and can let the app sit until you need it again if you only need it for a short period.

They also offer the option of getting a pay as you go international calling plan that extends the reach of your second phone number to supported countries globally.

No matter your reasons for getting a second phone number, we’re confident that one of the apps on this list will be a good match for your needs.

8 Tips to Ace Your Video Conference Interview in 2021